TL;DR: The combination of a less than great vulnerability handling processes by Adobe, and the use of default credentials by Microsoft yielded remote code execution on the signout.live.com domain.

The following remote code execution vulnerability in the signout.live.com service was reported to the Microsoft Security Response Center in late 2015 and has since been patched. This vulnerability was the result of an operational configuration error, as well as another vulnerability inside of the Adobe Experience Manager (AEM) installation used to provide this service.

Due to the circumstances around this RCE, details of a previously unpublished and potentially ‘silently patched’ vulnerability in the Adobe Experience Manager (AEM) Dispatch module will also be covered (CVE-2016-0957).

Adobe Experience Manager (AEM) is an ‘enterprise grade’ content management system sold and maintained by Adobe Systems. The core components of this system run inside of a JVM, with an optional Apache HTTP server module provided for ‘caching and/or load-balancing’.

Upon first encounter, AEM appears to be a fairly typical enterprise application made of pain, suffering and Java. These feelings are quickly realized upon running the quickstart installation package which consists of a single several-hundred megabyte JAR that unpacks neatly into a tree of hatred and self loathing.

Under the hood, this ‘stock’ AEM deployment consists of a vast array of open source products and some Adobe brand glue. Rather than the services which comprise AEM being deployed in a ‘traditional’ manner, they are instead implemented as components inside of an Apache Felix based Open Services Gateway initiative (OSGi) framework. 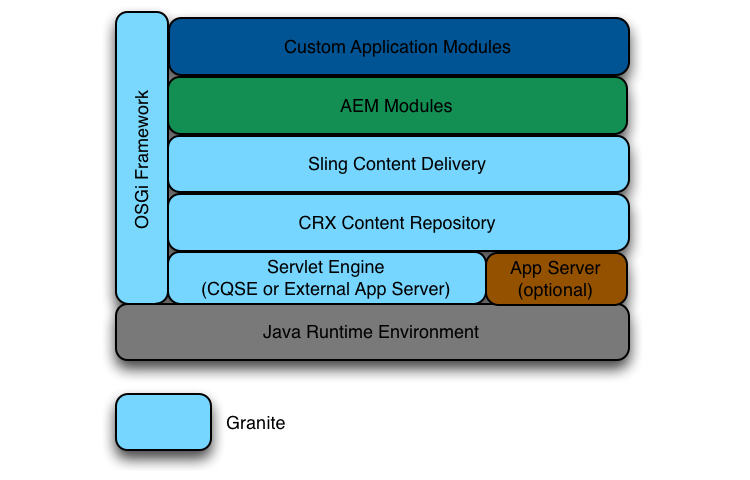 The advantage of this system is that these components, known as OSGi ‘bundles’, can be installed, restarted, or re-configured without the need to restart the OSGi framework or underlying JVM. In addition, this architecture allows for the extension of AEM through the development and installation of custom OSGi bundles.

An example diagram of this style of tiered deployment can be found below:

In order to improve the security posture of an AEM installation, these tiers are typically deployed with the Author and Publish tiers protected from the world through network segmentation and/or access controls. The Dispatch tier is generally the only tier ‘open’ to the internet, providing a mechanism to retrieve and cache content from the Publish tier (in a manner not unlike that of a reverse-proxy).

As a result of the Dispatch tier pulling data from upstream Publish nodes, the Dispatch module implements a ‘filtering’ mechanism in order to mitigate abuse. This filter is especially important given that nodes in the Publish tier serve both content and administrative resources via the same Apache Sling service.

As an example of why this filtering is required, the following URLs on the Publish node publish.example.org are able to be accessed without any authentication:

However, if accessed via the Dispatch tier - assuming a default Dispatch configuration with an empty cache - the following should be true:

In order to implement these restrictions, the default AEM Dispatch module configuration contains a set of filters which operate in a default ‘deny’ manner: If a resource hasn’t been explicitly allowed inside of a filter block, requests for that resource would be denied.

In order to better demonstrate this configuration, an excerpt from an example Dispatch configuration file - taken from the AEM 5.6.1 ‘security checklist’ - has been included below:

The end result of this configuration is that the ability to pull Publish tier administrative resources through the Dispatch tier should be prevented.

CVE-2016-0957 is a very simple vulnerability brought about by the unexpected and improper behavior of the glob filter inside of the AEM Dispatch module. The net result of this vulnerability is that glob filters can be trivially ‘coerced’ into returning an allow match for resources which may otherwise be denied. This coercion is possible due to glob filters matching on not only the requested resource URL, but also on any included HTTP query parameters.

Exploiting this vulnerability is as simple as appending a known-allowed resource path onto a filtered URL as an HTTP query parameter.

An example of this bypass can be found below; assuming the use of a configuration similar to that listed above:

Depending on the version and configuration of the affected AEM installation, the above vulnerability could expose the Publish tier to a number of vulnerabilities, including:

This behavior was initially observed inside of an AEM 5.X environment which utilized a default Dispatch configuration towards the end of 2015. When discovered, this issue was reported to the Adobe PSIRT as a potential security vulnerability. A number of days after this report was submitted, the Adobe PSIRT advised that this was a known issue with the Dispatch module and had been ‘addressed’ in version 4.1.5 onwards.

As the reported behavior was observed in version 4.1.9 of the Dispatch module, a subsequent email was sent to the Adobe PSIRT in order to request additional information.

After some time, the Adobe PSIRT detailed that the reported issue had been previously discovered internally and that version 4.1.5 of the Dispatch module onwards contains a url filter directive which should be used in place of glob filters.

In order to confirm suspicions that this issue had been ‘silently patched’ by Adobe, all security advisories and release notes for the Dispatch module were reviewed. In the end, only a single-line statement relating to this change was able to be found - which was found in a CHANGELOG file, inside of the 4.1.5 Dispatch module release tarball:

Further to this statement, no additional information appeared to have been published relating to this vulnerability.

As a result of these findings, an additional email was sent to the Adobe PSIRT expressing concerns related to the handling of this vulnerability and a retrospective security advisory was requested.

On February 9 of 2016, Adobe raised APSB16-05 which formally allocated CVE-2016-0957 to this vulnerability, and disclosed that ‘Dispatch 4.1.5 and higher resolves a URL filter bypass vulnerability that could be used to circumvent Dispatch rules’.

With an overview of both AEM and CVE-2016-0957 out of the way, the following section describes an example where the combination of this filter bypass, and the misconfiguration of the AEM Publish nodes used by signout.live.com were able to be used together in order to allow for the execution of arbitrary code. 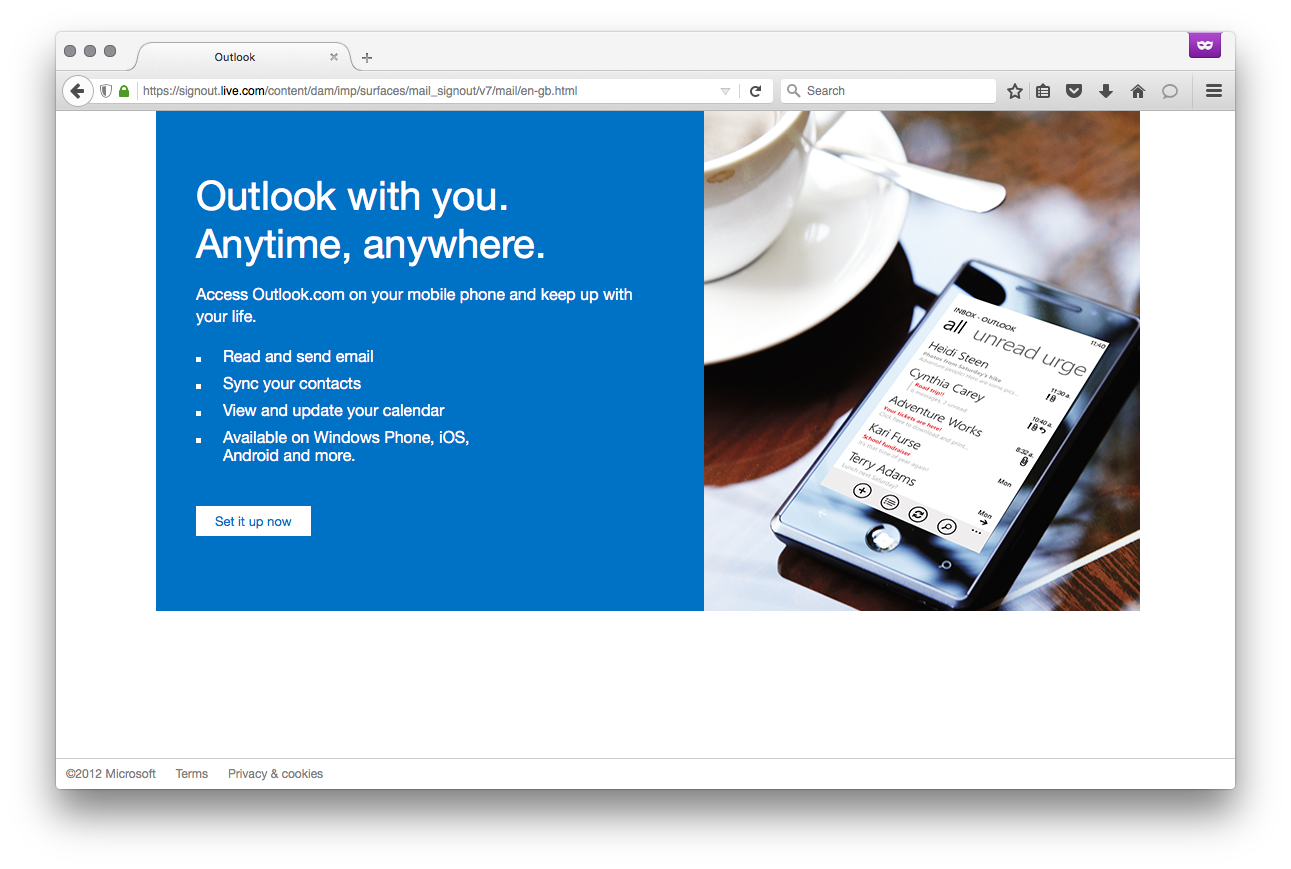 When this signout redirect was first encountered, it was noticed that the URL structure looked suspiciously like it may have been generated by an AEM. In order to confirm these suspicions, the body of the rendered HTML page was examined for the presence of a number of common AEM components. The presence of a handful of Javascript libraries indicated that this page was at least generated by AEM.

As this was following the discussed interactions with the Adobe PSIRT, an attempt was immediately made to see whether the default glob style filters were in use. This was done by requesting the URL for the AEM OSGi console with an HTTP query parameter of .css appended:

In order to verify that this was correct, this same URL was accessed using a web browser both with and without the query parameter. As expected, the former request successfully bypassed the Dispatch filter and resulted in an HTTP Basic authentication prompt: 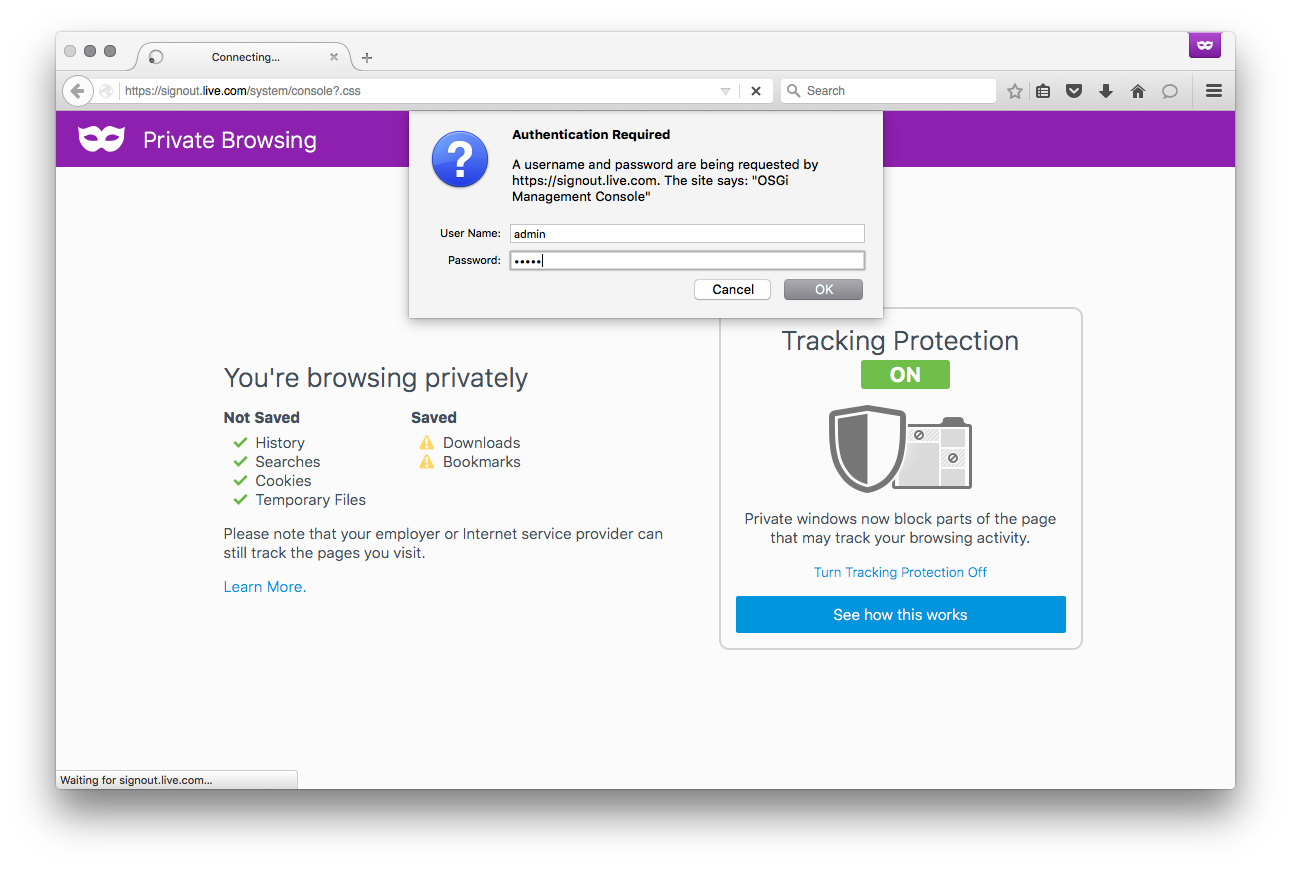 Given that it was possible to bypass the Dispatch filters, it was initially thought that it may have been possible to brute force credentials for an AEM built-in administrative accounts in order to gain access to the OSGi console. However, before getting that far, and in a “what if..?” moment, the default credentials of admin / admin were attempted. 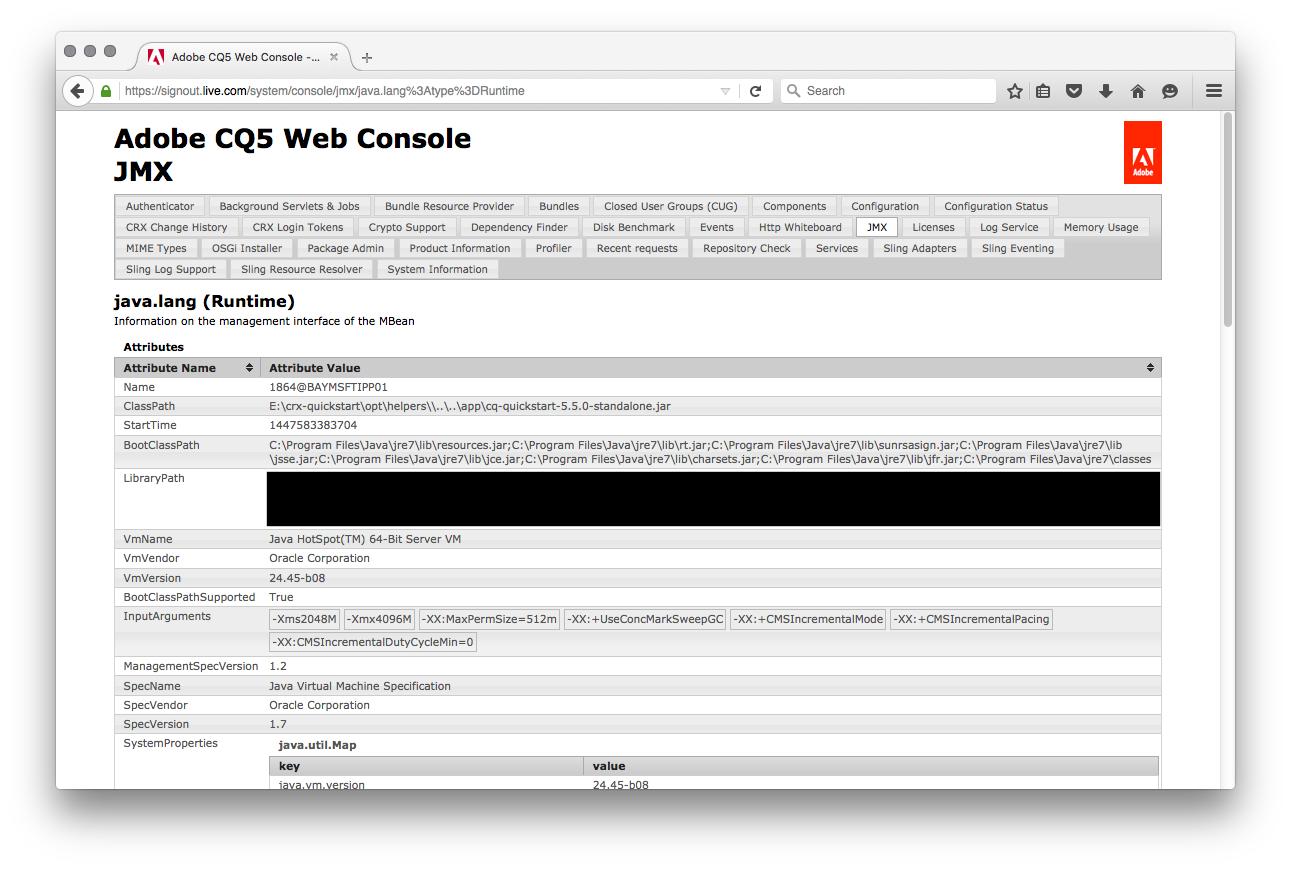 In a moment of utter disbeleief, it appeared that these default credentials had been accepted and full-administrative access to the AEM Publish nodes’ OSGi console had been granted. In order to confirm that this was valid, a number of subseqent requests inside of the OSGi console were performed, all of which completed successfully. 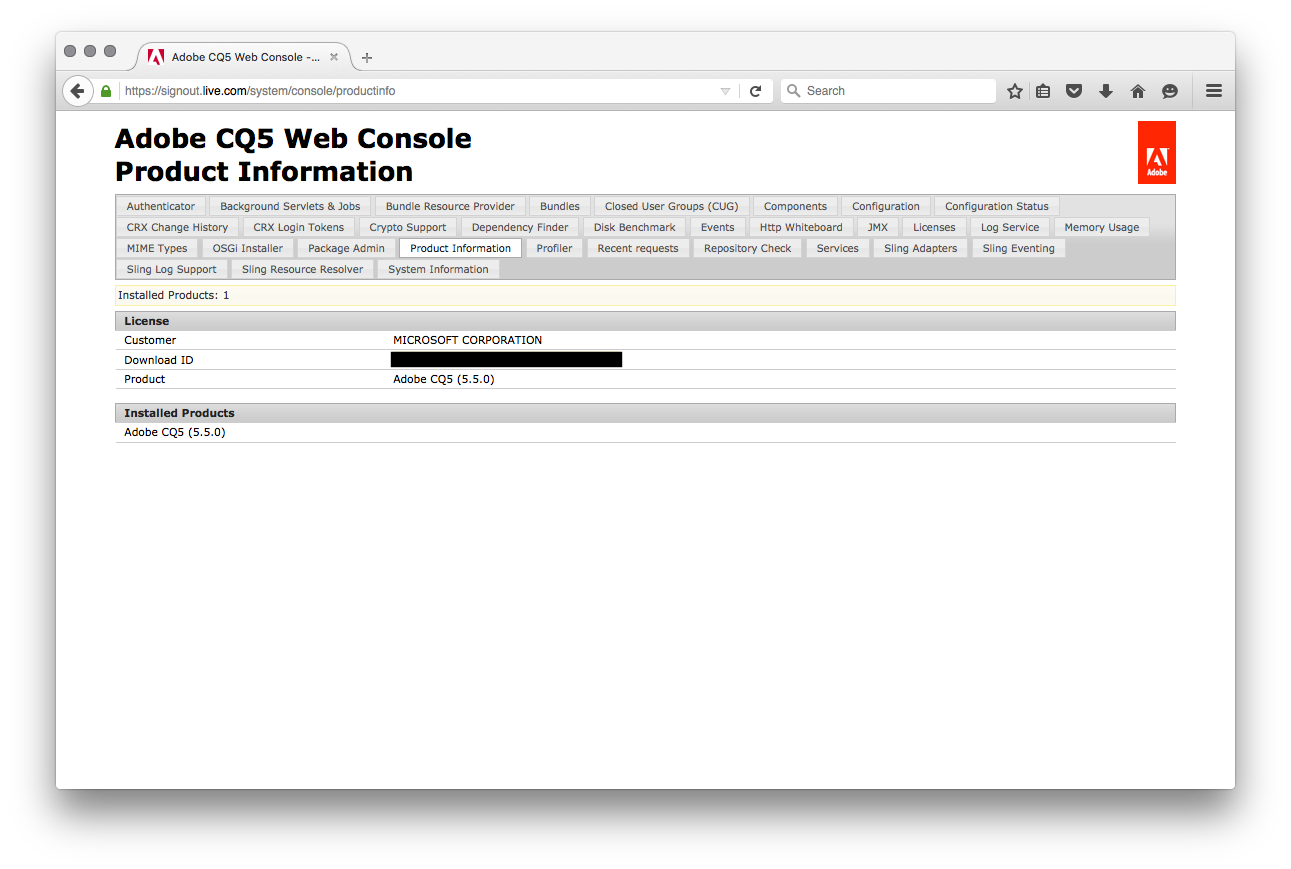 At this stage, it would have been possible to execute code inside of the JVM through the upload of a custom OSGi bundle. However, the question was whether it was possible to escalate access further - as a purely hypothetical and ‘off instance’ exercise, as no code was attempted to be loaded into the Microsoft system at any time.

As part of this exercise, a list of loaded OSGi bundles in a generic AEM 5.X deployment was reviewed, where it was noted that org.apache.commons.exec was loaded. This bundle appeared to be an implementation of the Apache Commons Exec library, which provides a method to ‘…reliably execute external processes from within the JVM’.

In order to confirm whether this library was able to be used, a quick proof-of-concept which utilized both this library, as well as the OSGi BundleActivator interface was developed. This OSGi bundle was configured in such a way that when loaded, the org.apache.commons.exec library would be called and a ping command would be fired against an external server.

Due to the nature of the AEM OSGi framework, once installed, this module would persist inside of the system and would be loaded automatically at system start-up.

Ignoring POM files and associated boilerplate, a simple ‘command executor’ OSGi bundle was able to be implemented in as few as 18 lines of Java - and likely in less by someone who knew what they were doing :)

Unfortunately, on the 4th of May 2016 it was confirmed by the MSRC that this report was not eligible for a monetary reward under the Microsoft Online Services Bug Bounty program as the affected domain was not explicitly listed as in-scope.