A number of WNDR series devices contain an embedded SOAP service for use with the NetGear Genie application. This service allows for viewing and setting of certain router parameters, such as:

At first glance, this service appears to be filtered and authenticated; HTTP requests with a SOAPAction header set but without a session identifier will yield a HTTP 401 error. However, a HTTP POST with as little as a blank form and a SOAPAction header is sufficient to execute certain requests and query information from the device.

As this SOAP service is called via the built-in HTTP / CGI daemon, unauthenticated queries will be answered from the WAN if remote management has been enabled on the device. As a result, affected devices can be interrogated and hijacked with as little as a well placed HTTP query.

The included proof of concept queries this service in order to extract the admin password, device serial number, WLAN details, and various information regarding clients currently connected to the device.

In the case of the WNDR3700v4 - as other devices may utilize a different arrangement - the under-laying system is built on-top of OpenWRT. As part of this, the OpenWRT uhttpd service is being used to serve up the management interface on this device. This said, NetGear specific functionality is implemented via an ELF binary called through the uhttpd CGI provider.

Although there are a few NetGear patches inside of the uhttpd codebase, the vulnerability exists inside the custom CGI provider and not the OpenWRT uhttpd service.

If we review an abridged version of the uhttpd code - taken from the NetGear WNDR3700v4 GPL package - we can see that when the application is loaded, uh_config_parse is called (line 735) and a loop to handle client connections is started (line 818). 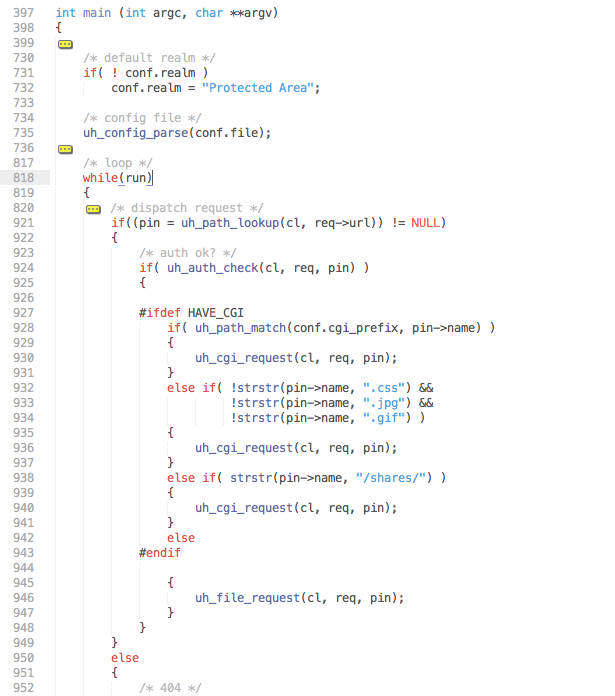 When a HTTP request comes in uh_path_lookup is called to evaluate the requested URL (line 921). If the request path is found to be invalid by this lookup the rest of the block is bypassed and a 404 returned to the client (line 952).

Further to this, due to the routing at line 931, all we need to do is request a resource that exists and doesn’t have .gif, .jpg, or .css somewhere in the filename and ug_cgi_request will be called.

Interestingly enough, uh_auth_check (line 924) is doing absolutely nothing here; we could replace this call with an if(true) and achieve the same functionality. This is not the fault of the uhttpd service but rather the lack of realm configuration on the device. If we rewind a bit to uh_config_parse we can see why. 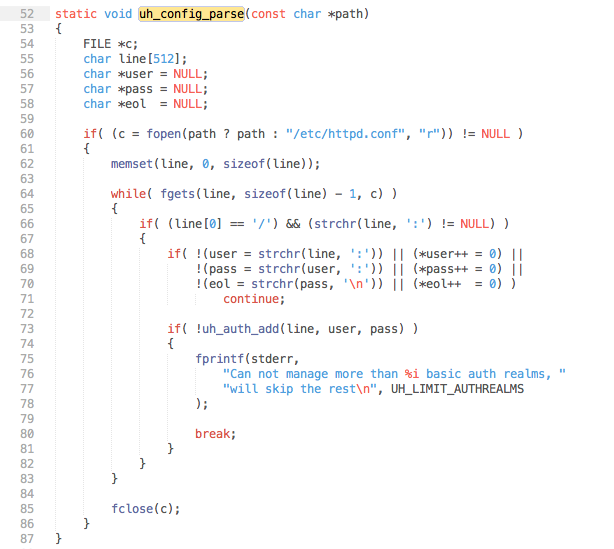 The uh_auth_add function, which populates the realm array, is called per line of realm configuration from either the configuration file specified as a command argument or a default of /etc/httpd.conf.

However, if we inspect the uhttpd.sh init script on the device we can see that no configuration file path is specified at daemon start. If we also check for the presence of the default file - being /etc/httpd.conf - we find it to be missing.

This ends in a realm blank array. As a result of this, all documents bypass uhttpd build-in authentication - due to the uh_auth_check returning true by default. 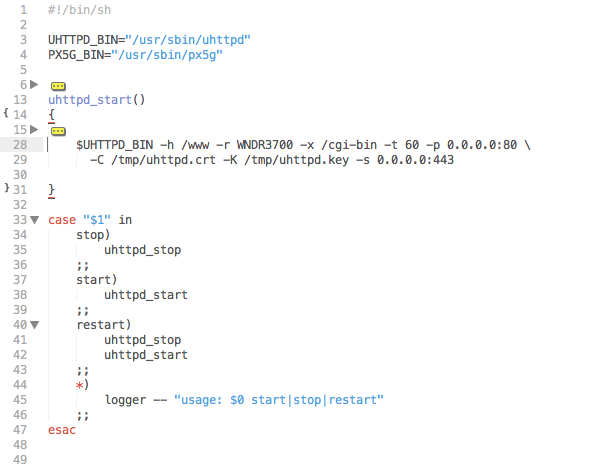 Based on this information, and the location of the authentication data in SOAP envelopes from “Genie” client, we can ascertain that authentication is being handled by the net-cgi process directly.

As found above, the net-cgi process seems to be called for almost all documents, and is in charge of both authentication and processing of CGI requests. The net-cgi process itself is an ELF binary that is called through the uhttpd CGI wrapper; specifically by an execl() (line 429) inside of the uh_cgi_request function: 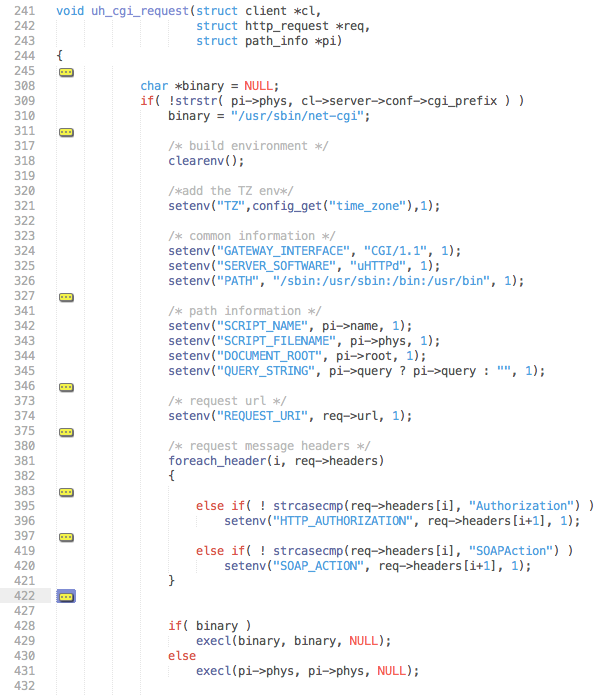 All pertinent HTTP headers - and a few others that are hidden in this excerpt - are passed through environment variables to net-cgi. Included in these headers are the two that we are interested in: SOAPAction (line 420) and Authorization (line 396).

As we’re now hitting a binary that we do not have sources for we will need to start debugging the process directly. In order to do this, we will be using gdb, binutils and radare2. Lucky for us however, the GPL package from NetGear includes a pre-compiled net-cgi with debugging symbols.

To start, we need to work out where we are in the world. In order to do so, let’s look for somewhere that we can attach a breakpoint to and then trace backwards from.

There are a few interesting looking results here, so let’s get started with those most likely related to the execution of SOAP requests, namely ExecuteSoapAction and SendSoapResponse. We’ll start by attaching a breakpoint to ExecuteSoapAction (0x00429f88) and submit a known-working SOAP call to the device (GetInfo from the LANConfigSecurity namespace). 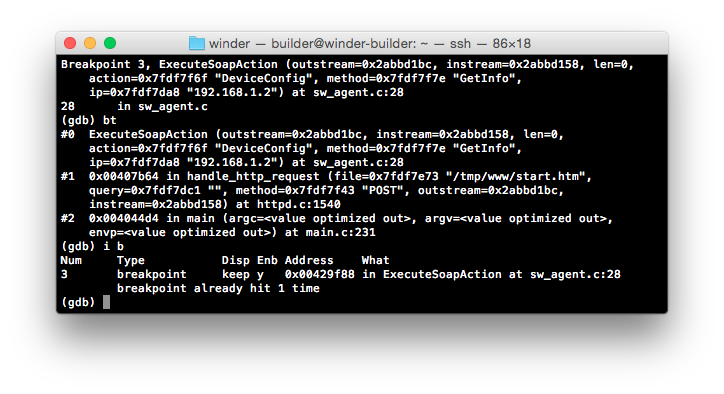 …that’s exactly what we want to see; we’re hitting our installed breakpoint as expected. If we inspect a trace leading up to the breakpoint we can see that ExecuteSoapAction is called via handle_http_request, so it looks like we’re on the right track.

Let’s attach breakpoints to all of the addresses we found related to authentication and give the same request another shot. 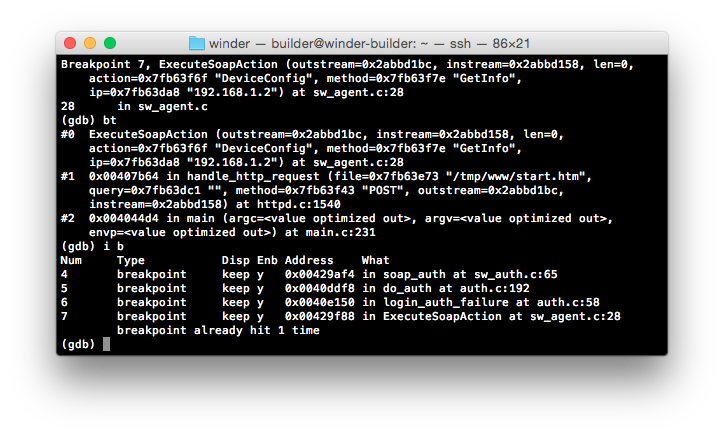 Err, righto, we didn’t hit any breakpoints… Let’s try a different SOAP action instead. This time we’ll try with Authenticate from inside the ParentalControl namespace - which is used as part of initial authentication envelope sent by the “Genie” application. 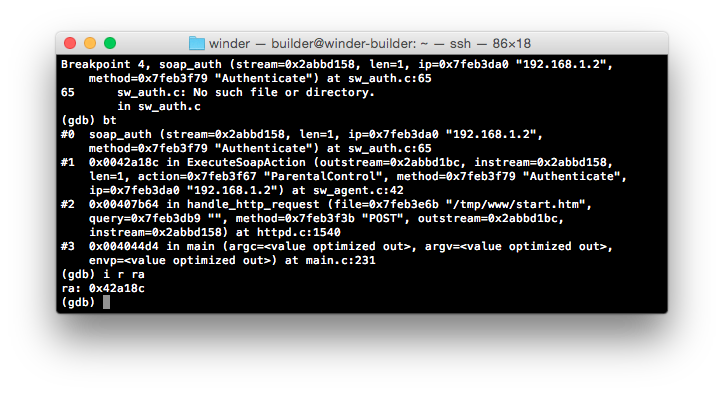 Finally, there’s the breakpoint we were expecting to see. The real question is why we’re not hitting this break-point unless we submit a SOAP action inside of the ParentalControl namespace.

First though, let’s work out where we are and how we got there.

If we look at the trace, and the contents of the ra register, we can see that soap_auth is being called from ExecuteSoapAction at 0x0042a184. If we compare this with previous traces, and the contents of the ra registers at each step, we find that we’re kicked to ExecuteSoapAction (0x00429f88) by 0x00407b5c inside of handle_http_request. As this is exactly the same behaviour we’ve seen with other SOAP actions - except for the final kick to soap_auth - we’re likely being routed through the application in a consistent manner up until this point.

Now that we know how we’re getting from handle_http_request to soap_auth, the question is why we only hit soap_auth during a SOAP call that lives inside the ParentalControl namespace.

Once we’ve traced through and commented as much of ExecuteSoapAction as we can, it becomes quite clear what’s causing this. 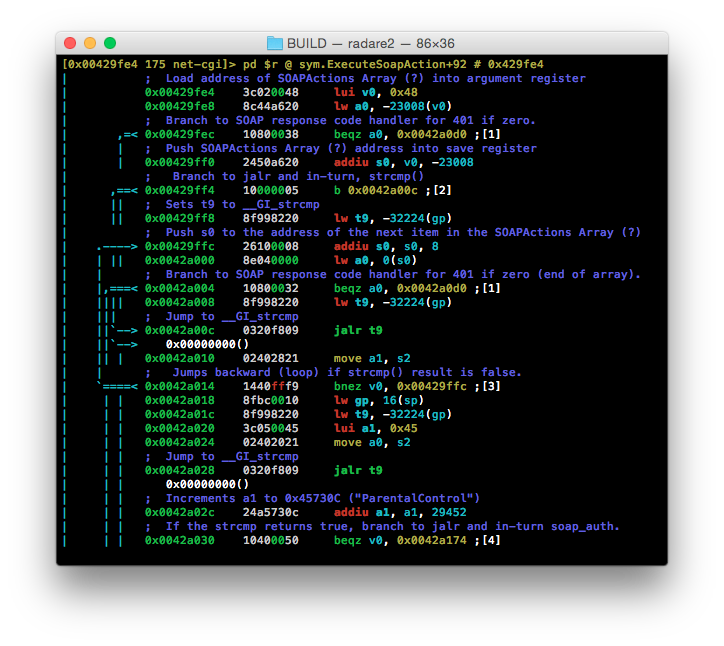 At 0x00429fe4 the program seems to load the address of a SOAPActions array into argument register a0. At 0x00429fec it then performs a ‘safety check’ to ensure that the array it just loaded is non-zero.

Assuming the array was loaded, we’re then branched to a jalr at 0x0042a00c which jumps to the address of strcmp() - via libc. This strcmp() is testing whether the first element of the SOAPActions array we just loaded matches the SOAP namespace specified in the SOAPAction header from the client.

As per the comment above 0x0042a014, if this test fails - as the strings aren’t a match - then we are branched back up to 0x00429ffc where the address is incremented to the next element inside of SOAPActions. A quick test is performed at 0x0042a004 to ensure the new address is valid, and the whole process is performed again.

Interestingly, even after this lookup has been completed, a separate strcmp() is performed at 0x0042a02c to check whether the client specified SOAP namespace is ParentalControl. This seems to be where the soap_auth is referenced, and why authentication is only required for ParentalControl calls.

The process described above can be very roughly expressed as something like following pseudo-code:

Now that we know why soap_auth is only called for ParentalControl, the final question is why we receive a SOAP 401 message when we attempt to call a valid SOAP action with a blank request.

…Long story short, 0x00429fdc is responsible for this. 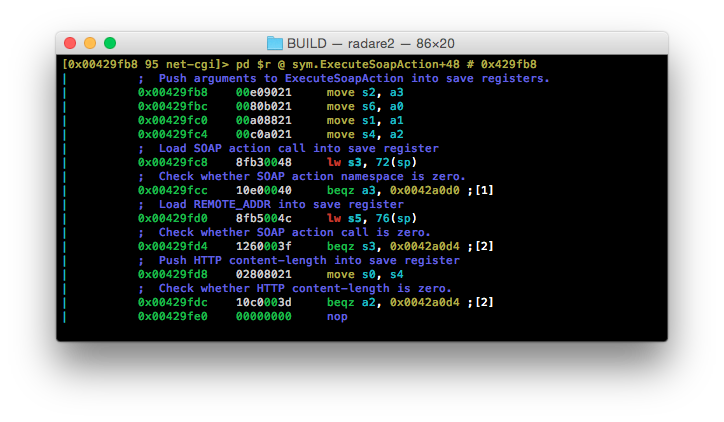 The beqz operation at 0x00429fdc is being used to ensure that the content-length HTTP header is greater than zero. If the content-length is zero then a branch is made to 0x0042a0d4 which in-turn branches again to 0x0042a110. At 0x0042a110 the address for SendSoapRespCode is pushed into t9, a static ‘401’ pushed into a1, the registers stored at the top of ExecuteSoapAction are pushed back into save registers from the stack, and SendSoapRespCode is called. 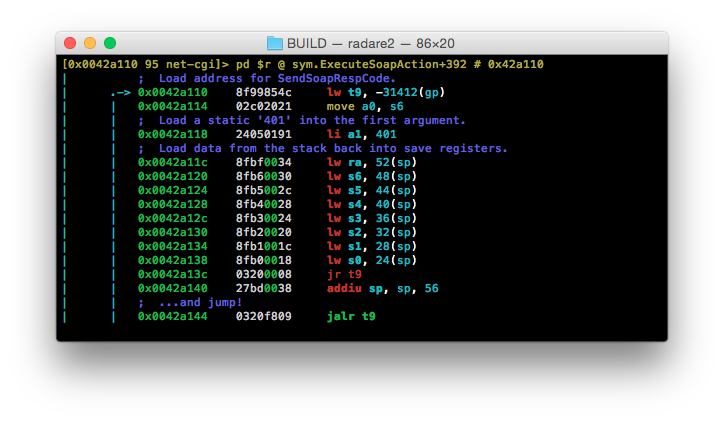 The client receives their response, net-cgi exits and everyone is happy.

I am unsure whether this value is verified to be non-zero as part of some sort of ‘authentication’ of legitimate requests, or due to this value being used in a stream reader later in the thread? Perhaps just to cut down on processing overhead for blank requests; in which case a HTTP 400 may have been more appropriate.

Either way, I shouldn’t be able to just ask for the keys to the kingdom and have them given to me. 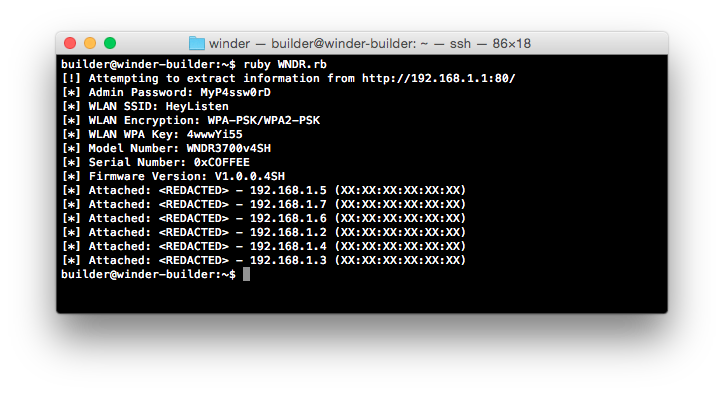